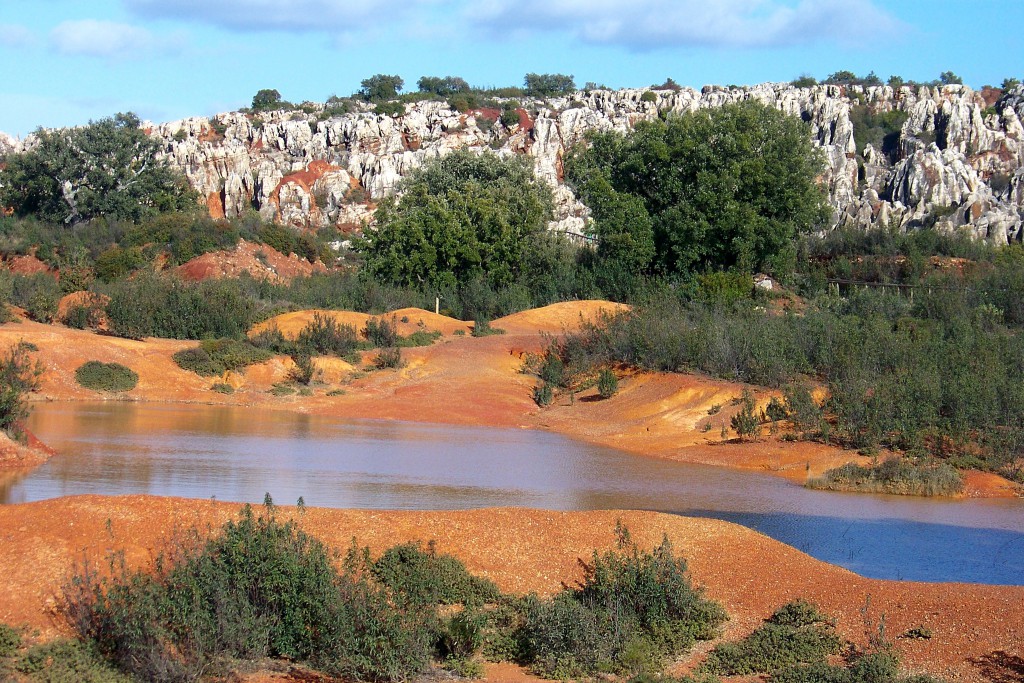 Back ground and objectives
An amphibian monitoring program with volunteers has been running in the natural park of Sierra Norte de Sevilla (Andalusia) since 2011. The natural park has an area of 177,000 hectares and forms part of the biosphere reserve “Dehesas de Sierra Morena” (450,000 ha) and is an “area of national importance for the conservation of herpetofauna”. The principal objective of the monitoring is to improve the conservation status of the amphibians by means of a participative and educative monitoring program (De Vries, Marco & Goverse 2012: in Froglog 105 www.amphibians.org). The method was designed so that the results can be incorporated in the national amphibian monitoring program (SARE). The method enables participants to learn and obtain deeper knowledge on the recognition of the species, life stages, population dynamics, habitat, ecology and conservation problems. At the same time valuable information is collected to study the natural dynamics and conservation status of the species and their habitat through the entire territory of the natural park. Close contact is maintained with landowners, naturalists, regional authorities and staff from the natural park and they are informed on the results. Authorisation for the research is provided by the regional government (Consejería de medio ambiente de la Junta de Andalucía). Scientific research institutes and a network of professional herpetologists collaborate in the study, the evaluation and analyses of the data. The results are an important reference for the status of amphibians in the territory and help direct conservation actions and more profound research.

Methodology
Annually two sampling rounds are executed in 110 preselected locations of which the importance to amphibians was apparent from previous surveys (2005-2010). The first year confirmed that the method allowed the detection of populations from all 12 amphibian species throughout the natural park territory (figure 1). 20 different zones are included, each with the more important and representative aquatic habitats in the area: ponds with vegetation, ponds without vegetation, ephemeral waters ,shallow inundations, concrete water basins (albercas) and streams. With a sampling round in February and another in May it is intended to detect reproduction success of all 12 amphibian species. During each sampling round the sites are surveyed during both day and night. A visual survey is made to detect eggs, adults and certain larvae species. In addition sweeps are made systematically with 5 in the shallow water and 5 in the deeper water area. Importantly a picture is made of the habitat, of each species and each life stage. The data is collected on sheets and digitally, and is validated by professionals on basis of the pictures. Each group has an (herpetological) expert, a local naturalist and other participants and is equipped with all field materials (dip nets, wading suits, photo-aquaria, tubes, boxes, etc.). Years 2011 and 2013 had a high precipitation (total annual precipitation September-September), while 2012 had been very dry. All species were recorded in nearly each sampling round in all years. 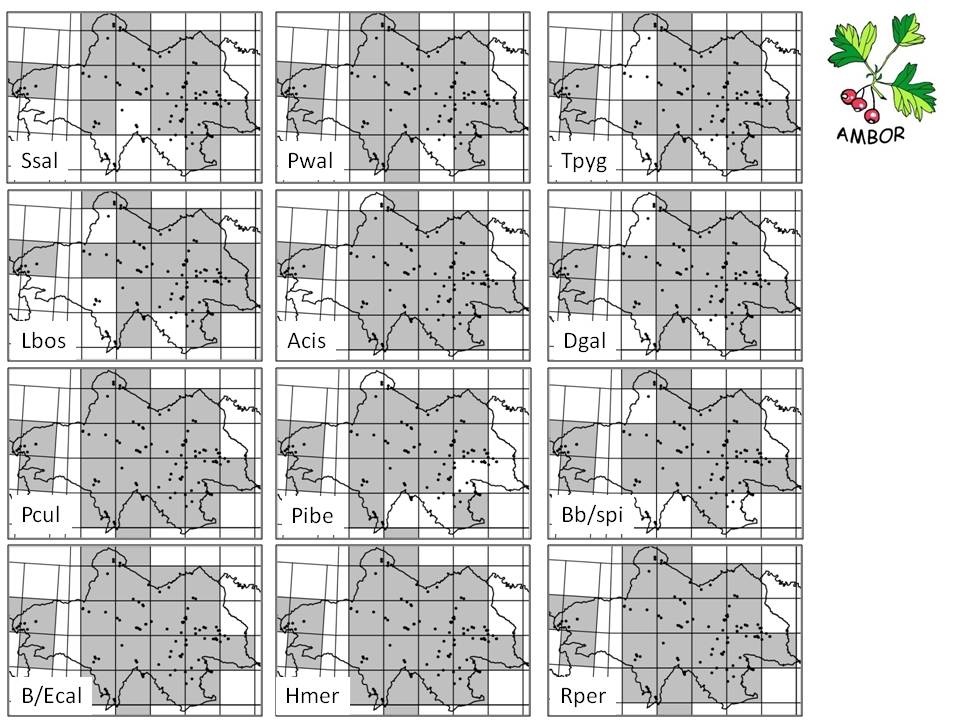 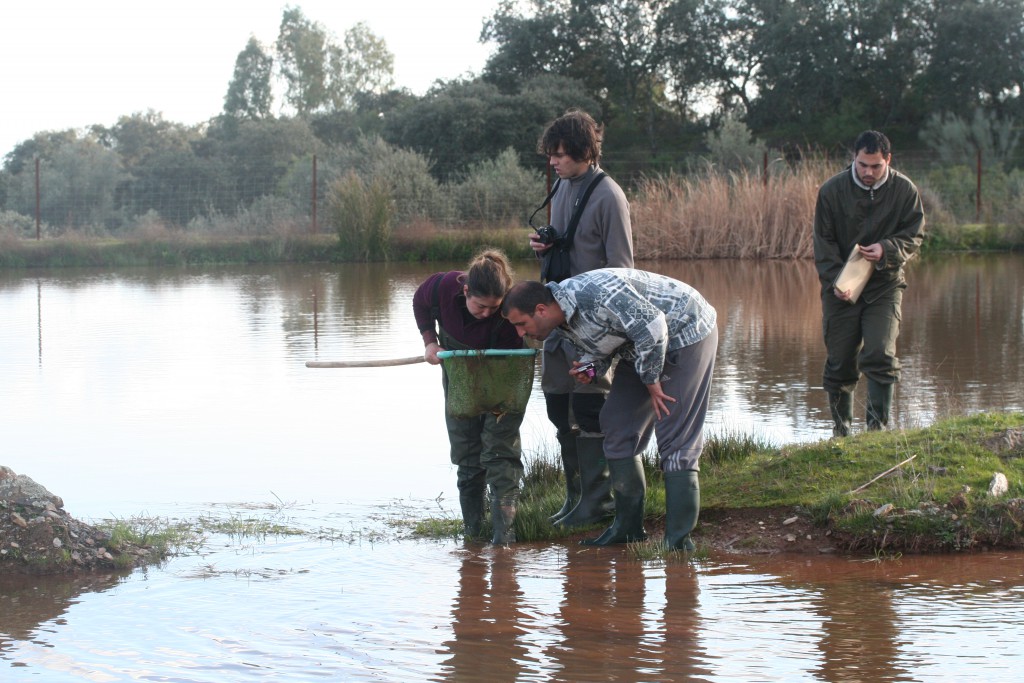 Results
In the first five years (2011-2015) over 250 people had been involved. Among the participants there were nature interested volunteers, (professional) herpetologists, landowners, land users and staff of the natural park. The results reflect the amount annual of precipitation (figure 2). In both wet years more individuals were registered in a higher proportion of sites. In the same locations that held a high importance toward amphibians in wet years, during the dry years they seemed to hold a very low importance toward amphibians. The only species that was recorded in the same or increasing proportion of locations was the Fire salamander (Salamandra salamandra morenica). Remarkably, over 50% of the locations with a high importance to amphibians had conditions in which amphibians could not survive in the water during one or more sampling rounds (for example they were dry or filled). Although this seems a very negative factor, it actually demonstrates the importance of this dynamic for the presence of large amphibian populations. Such conditions cause a strong decline in populations of (predating) species of more permanent conditions (e.g. fish, dragonflies, beetles). On the other hand, in sites where the aquatic habitat was continuously present, many exotic invasive (predating) species were recorded (fish, cray fish, plantas exóticas, galápagos). Only some amphibian species coexist with these species in streams, concrete water basins and larger ponds. 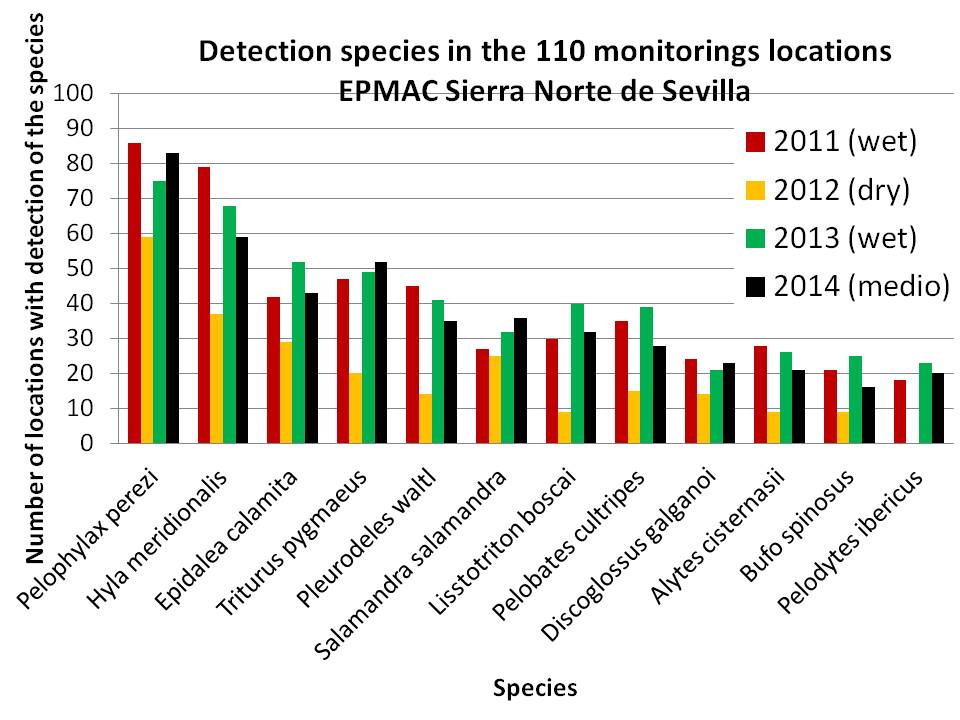 Conservation status
In the course of these years an important deterioration of the habitat was observed. 15% of the studied locations were negatively affected since 2005. Each year, additional deteriorated sites were recorded. The most visible problems are the filling in of sites (active or passive), introduction of (exotic) fish and cray fish, deterioration of concrete water basins or emptying during the breeding season. At the same time the monitoring recorded that many land owners and users actually were improving the habitats for amphibians. In some situations habitat was improved as a spin-off effect from the monitoring as land owners were stimulated. The habitat which is the most obviously affected on a large scale are the concrete water basins (historically and locally used for watering in summer, but with no or little use during the amphibian breeding season). Many of these basins are broken or the water source has dried up. Others on the contrary have obtained a more intensive use which means that no plants can develop. In the dry year of 2012 land owners and users cleaned many basins (and ponds) during the amphibian reproduction season. The results of the monitoring actually demonstrate that they could not have chosen a better year, for at the same time there were relatively few individual amphibians present in the waters. In basins that had water and vegetation in before, the impact on the populations will be much bigger as it will take many years before the vegetation will develop again.

Quitrid fungy - Batrachochytrium
Other less conspicuous problems that affect the amphibian populations in the entire territory of the natural park were also detected: In 2012 the quitrid fungi (Batrachochytrium dendrobatidis) was recorded for the first time in Sierra Norte de Sevilla. A sample of a dead Rana perezi was collected during the monitoring and was analysed positively by the laboratory of the National Museum of Natural Sciences CSIC in Madrid. This “fungi” is held responsible for the disappearance of over 200 amphibian species in the world in the past few decades. Even though no massive mortality has been recorded in Sierra Norte, the amphibian populations are most surely affected negatively. In Eastern Andalusia mass mortalities have been recorded in Alytes dickhellenii. The monitoring is an important event with education around such problems. Since 2011 participants of the monitoring and materials are disinfected on their arrival to avoid the introduction of such species. A similar fungi (B. salamandrivorans, B2) seems to have caused near entire extinction of the Fire salamandra (Salamandra salamandra) in the Netherlands between 2008 and 2013, which demonstrates the importance to be aware of new problems and have a monitoring system that can detect them.

Other conservation problems
Another problem in the Sierra Norte de Sevilla for the amphibian populations is the very fast disappearance of the Elm-forests (Ulmus minor) due to the Elm-decease that is caused by a beetle-fungi. With the disappearance of the cool forest climate along the streams the Salamandra salamandra and Bufo spinosus especially, have less optimal habitat. Other large scale problems for amphibians in the area is the nocturnal traffic on asphalt and rural roads and paths and the application of chemical pesticides and fertilizers along the roads, in (not ecological) olive yards and near the houses. Annually thousands (and probably tens of thousands) of adults and millions of juveniles and sub adult amphibians get killed by traffic on the roads in the natural park and this “area of national concern for the conservation of herpetofauna”. Highest mortalities are noticed in the rainy nights with mass migrations, also parallel to streams and rivers or other wet areas. 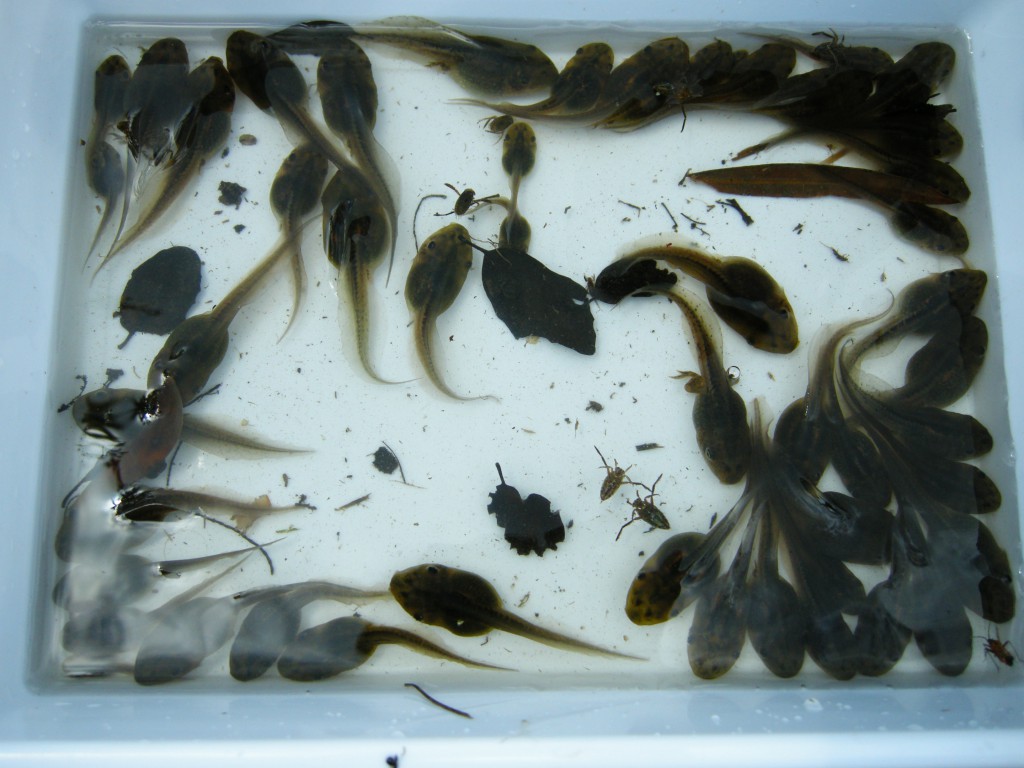 Spin-offs of the monitoring
Important spin-off effects of the monitoring can already be noticed. As a consequence of the constructive education method, participants have increased their knowledge on recognition. Corrections on the data on basis of the evaluation of the sheet-data and the picture data have reduced from nearly 10 % to 1 % in only three years. Thanks to the monitoring it can be noticed that many naturalist in the area now have a wider understanding of the recognition and ecology of the amphibian species. The wider understanding results in a better mapping of important areas and the direction of conservation actions. The regional government is willing to collaborate in restoration projects, though finances remain scarce. Participants from Seville have formed various nature conservation groups to develop conservation actions for amphibians in other areas of the province. The continuation of the monitoring and participation of local naturalists had been made possible by the participation of foreign participants as they bring many years of experience with amphibian research and monitoring. The higher contribution fee for foreign participants is used to cover the board and lodging of local nature guides, naturalist and herpetologists as well as other expenses. In 2013 a similar long term educative monitoring approach was initiated and launched in north-eastern Poland by participants of the Sierra Norte and other naturalists. In 2014 the first active conservation actions were developed in several of the monitoring sites by Asociación AMBOR and Red de Voluntariado del Parque Natural Sierra Norte de Sevilla. 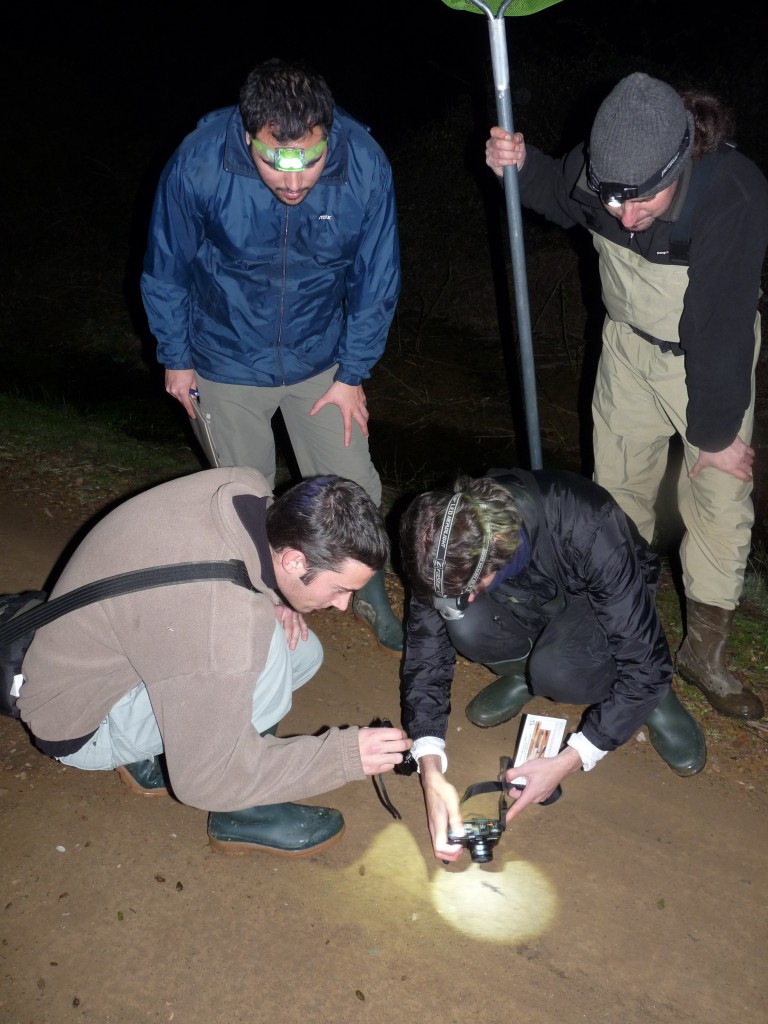 Amphibian species in Sierra Norte de Sevilla
12 species of amphibians have large populations in Sierra Norte de Sevilla. The area is appointed as an area of national and also regional importance to amphibians and reptiles. There is a high species diversity and also nearly all species occur in high densities (De Vries, Marco and Menor, 2009. article in Boletin de la Asociación herpetológica Española available as PDF). The area consists of wooded meadows grazed by life stock (pigs, sheep, cows) and large hunting areas. Near the villages there are (ecological) olive yards and meadows. More shaded and thus fresh and humid slopes have old forests with Castanea sativa. Relatively few hectares are present with fields, orchards, urban areas and roads. Each of the 12 amphibians live in slightly different aquatic and terrestrial habitats.